Gardening 101: How to grow great tomatoes 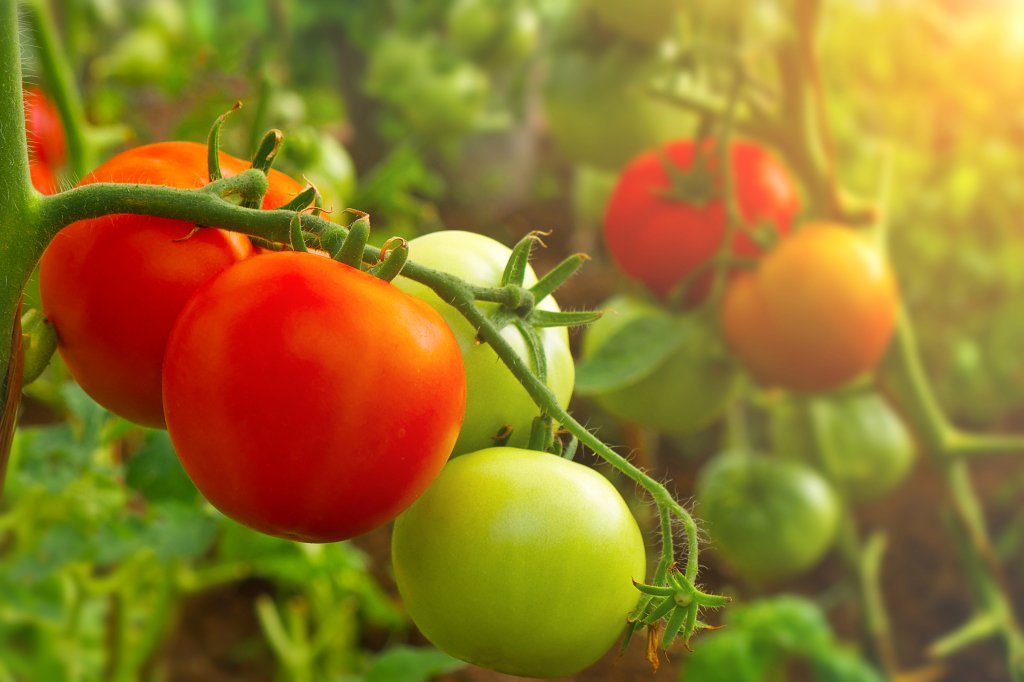 Everybody’s favorite warm-season garden star? Tomatoes. We plant them, we nurture them, we rejoice with every yellow blossom and, in harmony, we curse the dreaded tomato horned worm when it inevitably appears.

In our recent Gardening 101 webinar, viewers had so many questions about tomatoes we couldn’t answer them all. So here’s the information you need to create a tomato heaven in your garden, whether it’s in your backyard or in containers on the patio or balcony.

The secret to growing good tomatoes starts with how you plant them, which is deeper in the ground than you might think.

Trim off the lower leaves on the plant, leaving the top third in place. Then dig a hole deep enough to bury the plant all the way up to those top leaves.

Actually, dig it a little deeper than that, because before you plant anything, you’re going to toss in a handful of organic vegetable fertilizer, a handful of bone meal, a handful of worm castings, a couple of pulverized egg shells and two or three uncoated aspirin tablets — yes, aspirin! — into each hole. You also can add a fish head, if you’ve got one.

Cover the additives with a bit of soil and add the plant. Fill in the hole, burying the plant so only the leafy top is above ground, and create a water well around the base of the plant. Water gently, but thoroughly, and wait for the magic.

Roots will develop where the lower leaves were, creating a strong, extensive root system that will support a robust, thriving plant.

Q. How early can you plant tomatoes outside in the East Bay, specifically Moraga?

You can invest in a soil thermometer, or just wait until we’re having warming daytime and nighttime temperatures, which generally arrive in May.

Q. I plant primarily in containers. Can I use the same container and soil I previously planted tomatoes in for planting something different?

A. You can use the same pots, if they’re in good shape, but you’ll need to replace the soil.

Q. I’m just starting a garden this summer in planter boxes. Should I rotate next year or can I plant the same veggies? I plan on planting herbs, tomatoes, cucumbers.

A. The basic guideline for crop rotation is to avoid planting crops from the same family (such as the solanaceae family, which includes tomatoes, peppers, eggplant, okra and potatoes) in the same spot year after year. Generally, waiting three years to plant those crops in the same place again is recommended, so you avoid building up soil-borne pathogens that thrive on that particular plant family.

Q. Should I remove my tomato plant’s suckers — the leaves or little shoots that grow where the branch meets the stem?

A. Yes. They won’t produce tomatoes, and they take up valuable resources from the parts of the plant that do.

Q. Do you advocate putting a tomato plant on side for a few days before planting to stimulate horizontal development of roots?

A. Rather than just putting plants on their side and later planting, try digging a small trench that extends from the planting hole and gently bend the leggy stem into the trench and cover with soil. leaving the crown of the plant exposed above ground.

The leggy stem portion will grow vertical roots at the same time roots are extending from the root ball at the base of the plant.

Q. Will my tomato, eggplant and pepper plants from last summer survive and give vegetables this year? I have hot peppers from last year that have a lot of peppers on them…

A. If you lived in the tropics your tomatoes, peppers and eggplants could well last for more than one year. But generally in Northern California, winters are too cold, and we need to pull the plants out when they stop producing and replant when the weather warms in early spring.

Occasionally, a plant, such as your hot pepper, will over winter. You can certainly experiment with keeping it going for another year by harvesting the fruit and then applying compost and a bit of organic fertilizer, but not till after the danger of frost.

Q. I’ve been told to cut back drastically on water to get tomatoes to ripen. Is this true of indeterminate tomatoes? My second harvest of tomatoes were much smaller and tough skinned, and I wonder if they needed more water.

A. The method you’re describing is known as dry farming, which produces smaller, fewer and more intensely flavored tomatoes. Dry farming works with either determinate or indeterminate tomatoes, although you’ll want a variety that has a strong root system. Organic farmers in the Central Valley have experimented with many varieties and found that the hybrid Early Girl and the new variety, New Girl, do best.

Dry farming is a bit more involved than just cutting back on water. You need to prepare the beds beforehand, adding a lot of compost and other amendments into the soil to make it very loamy. After planting, cover the beds with straw or other mulch. Water as usual until the first fruit sets, then shut off the irrigation. This should force the plants to put down deeper roots to get the water they need.

Your plants could end up looking pretty sad, but the fruit will be amazing.

Q. I was going to pull my tomato plant, but it started producing again. What’s going on?

A. It’s just Mother Nature taunting us. Many tomatoes continue to produce long after the summer season has waned. If you like green tomatoes and don’t have a need for the bed, there’s no reason you can’t keep them growing, but the tomatoes won’t have enough sun and heat to ripen on the vine. Those that you ripen off the vine won’t taste as good as those you harvested in the summer. Bite the bullet, pull the plants and put something else in the bed.

Q. I get “volunteer” tomatoes every year. Should I just thin them out and go?

Sure, gardeners like to take advantage of freebies, and with volunteer tomatoes, you never know what you’ll get — maybe even a brand new hybrid. But you shouldn’t count on them for your main tomato production. For one, they might not taste very good.

Let them grow, if they aren’t taking up valuable space, but plant some varieties that you know will be tasty and will produce.